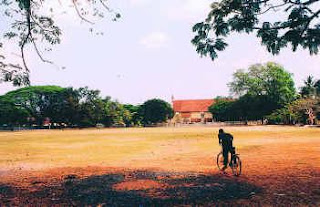 Today, the largest open ground in Fort Kochi, the Parade Ground is a an arena for sports and social gatherings. The renowned Cochin Carnival, concludes at the Parade ground. It is a prominent landmark of Fort Cochin, often reminding about the colonial past of this wonderful place. There is an old Banyan tree at the north east corner of the ground, near St. Francis church. This huge tree and the big trees bordering the ground, provide a green roof from the hot sun, for tourists and locals alike.
No comments:
Email ThisBlogThis!Share to TwitterShare to FacebookShare to Pinterest
Older Posts Home
Subscribe to: Posts (Atom)